Bigger Than Bolt: Jamaican Track Is Story Of 2012 Olympics!

Bigger Than Bolt: Jamaican Track Is Story Of 2012 Olympics!

Bigger Than Bolt: Jamaican Track Is The Story Of The 2012 Olympics! 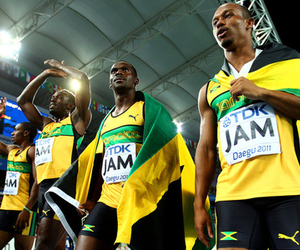 The Summer Olympics have ended, and most people have missed what's really the big story. That, Rory McIlroy's weekend at Kiawah Island and the end of Chad Johnson's career (?) in today's Monday Morning Jones.

Aug 13, 2012 - At Sunday night's Closing Ceremonies of the Olympic Games, a montage of David Bowie tracks was played, followed by models doing model things to "Fashion." Yet Bowie didn't come on stage. I figure he must be late. They wouldn't tease us like that, and I know the Brits wouldn't try to slip Annie Lennox in his place. We can tell the difference, OK?

Anyway, while I wait, here's what happened this weekend.

The story of the Olympic games was bigger than Usain Bolt. After dominating the men's 400-meter relay for most of the 20th century, the United States only won Olympic gold once after breaking the world mark at the 1992 Olympics. That record was one of the longest standing in track and field, untouched until Usain Bolt and his countrymen broke it in Beijing. Finally, the U.S. broke the ‘92 mark Saturday. It broke Jamaica's world record.

And it went home with silver, because the Jamaicans did it again.

But we're still gonna talk about Bolt. It was nice of Jacques Rogge to finally come around and say Bolt was the greatest sprinter of all-time. Rogge said Bolt needed to prove himself at two more Olympics before he'd concede that. This was in spite of the fact only one sprinter has won the 100 and 200 in back-to-back Olympics -- Bolt. Or that neither Jesse Owens or Carl Lewis, Bolt's only competition for this title, won individual gold in the sprints in three Olympics, let alone four. The only question about Bolt, at this moment, is whether there has ever been an Olympian with his combination of talent and charisma. The only name that immediately comes to mind is Cassius Clay. Who, needless to say, didn't compete in four Olympics.

Bolt's the biggest show most of us can remember. It's OK for Rogge to admit it.

A round of applause for USA Basketball. Let's skip the particulars. Teams USA, both men's and women's, were supposed to win the gold, and few are truly impressed when they do so. But lost in the residual embarrassment of the 2004 men's team's performance at the Athens Games obscures the United States' dominance in basketball. In its 17 Olympic appearances, it has won 14 gold medals (and had another stolen from them in 1972). The women's team has won every gold since 1984 but one.

Sadly, because of expectation, we don't show the basketball program its proper appreciation. What unit represented America -- especially relative to its competition -- better than the men's team? Why doesn't the women's team, full of names anyone even vaguely familiar with women's college basketball would know, receive the same mainstream love as its soccer counterpart? In a truly global game, no teams back up the belief that America is the greatest like our basketball teams. If that sort of thing matters to you, then they should be revered as such.

There's nothing funny about this Chad Johnson story. For years, Johnson reminded the world that, in spite of his thirst for attention and occasionally obnoxious public persona, he had never gotten in trouble off the field (at least not since college). Now, he's accused of assaulting his wife, a charge that's shocking to at least one man who has known him for years. While it's prudent in matters like these to wait for information beyond initial reports -- especially given nationally broadcast evidence of Evelyn Lozada's volatility -- Johnson would have a helluva time explaining the laceration on Lozada's forehead. By the same token, Lozada's got to explain how she ran to a neighbor's house so fast Johnson couldn't see where she went.

Clearly, the Dolphins weren't interested in hearing whatever Johnson had to say. This is crucial because it could, literally, end Johnson's career. Given the push the NFL is making to cut down on DUIs and domestic violence -- take note of the PSAs on violence against women airing on the NFL Network -- he'll be toxic until proven otherwise. Johnson is a 34-year-old receiver who caught 15 passes in his last full season, looking for work while darkened by the shadow of a summer where Roger Goodell has already had enough of stuff like this.

And just as quickly as it seemed the old Chad was back, he may be gone forever. That would be a jarring end for a man who was one of the most enjoyable, entertaining and effective football players of his era.

The future starts now for Dwight Howard. After all the nonsense of his contract drama, only one question should matter -- is Dwight buying in? Until he signs an extension, he'll have to prove that with his play and actions. So far, not so good. Talk of winning championships, even though he just joined the most accomplished and consistent franchise in American professional sports, was absent.

He offered a Kobe Bryant impression I bet we never hear again. He was the same ol' jolly Dwight we've seen for the last eight years ... as if that act is going to work anymore. After so much talk of him wanting to lead a team, he's signed up to be one of Kobe's sidekicks (at least that's how Kobe sees it). He's going to have to fall in line behind the clear leader and face of the franchise. And I guarantee Bryant would rather he master carrying himself like a champion than pretending to talk like one on the phone.

If Howard doesn't realize, right now, that he's going to have to change his approach much like LeBron James did after The Decision, 2012-13 could be a chemistry disaster much like the ballyhooed 2003-04 Lakers that added Karl Malone and Gary Payton. And if that happens, given the backlash Howard's bringing to Los Angeles with him, he'll learn that lesson the hard way.

And where the hell have you been? The coronation of Rory McIlroy as "the next Tiger Woods" didn't go as many expected after his record-setting win at last year's U.S. Open. But the next step for the current Rory McIlroy took place at Kiawah Island this weekend. He shot 75 on Friday, when the course was at his most fearsome. Besides that, he dismantled the field and, after 16 different players won the last 16 majors, McIlroy finally got back to the top like great players are expected to. He's still not great -- not even sure he's close -- but he justified some of the hype that's surrounded him for years, even if only for a weekend. A six-birdie Sunday will do that. Best of all, he guaranteed there will be a story at the 2013 Masters beside "is Tiger finally back?" Which, of course, brings us to...

Yeah, Tiger's still not back. Where McIlroy struggled Friday, Tiger shot 71, tied for the second-lowest score of that day. But when conditions improved, his scores -- and putting -- got worse. What must be troubling for Tiger is how he's followed up his better rounds in majors. None of his eight weekend rounds in majors this year were under par. Woods was once the greatest frontrunner in professional sports. Now, the sight of Tiger atop the leaderboard feels temporary. It was McIlroy who took over on Saturday and finished the job on Sunday. And, once again, Tiger was with the rest of the field watching McIlroy win easily. Tiger's still the best player in the world, but seeing someone do what was once Tiger's trademark makes the four-year breathless wait we've had for his "return" feel futile. Which, of course, won't stop us from doing it all over again at Augusta in April. But still.

Here's how the Jets mess starts. Here's what's confusing about Tebowmania -- Rex Ryan's calling card, since he was in Baltimore, was using his positive approach to boost the confidence of his players. It's part of why so many players love him. So, if Mark Sanchez is the Jets' starting quarterback, why would he undermine him by intimating that poor blocking will cut into his playing time?

Only one thing should cause Sanchez to lose his job -- poor play in the regular season. After all, Tebow didn't take Kyle Orton's position with the then-desperate Broncos as much as Orton lost it with a poor first half against San Diego. Even Tebow's most strident defenders acknowledge he's not a good player in practice. Yet, after a so-so showing against Cincinnati in New York's first preseason game, Ryan talks about ways Tebow could get more playing time? Sanchez should merely have to think about doing his job. Now, he's got to be concerned with losing his because other folks aren't doing theirs?

This is why the Jets can't have nice things.

How much does the Honey Badger matter? Sure, LSU can afford to lose a talent like Tyrann Mathieu. Though he was the Tigers' most lauded player last year, he was only their third-best cover corner. That said, those assuming LSU will simply reload seem to the value of a singular presence. There is no player in America like the Honey Badger, whose versatility allowed defensive coordinator John Chavis to use him almost like a wild card. He returned two punts for touchdowns last season, something that's important to a team that absolutely dominated the punt game from both directions last season (and only ranked 86th in total offense).

So yes, LSU has lockdown corners. Without Mathieu, it will still be Alabama's chief rival in the SEC West. But it won't have its game changer. If that isn't a really big deal, someone needs to explain why anyone gave Mathieu a nickname in the first place.

How much longer will the NFL lock out its officials before this farce ends? Officials should be seen and not thought about, something that's impossible as long as fans and media know they're watching refs who are, by definition, substandard. Fans don't cut the real refs any slack, making even the best performance from the replacements the target of harsh scrutiny. Plus, if all these bumbling officials need is a few weeks to become capable of working in the NFL, they wouldn't be working places like the Lingerie Football League and the NCAA's Division III.

Yet the NFL will continue to endanger its players and enrage its fans over money it can certainly afford to pay. After all, last summer's lockout of the players was supposed to ease the burden of these billionaire owners. If they can't be troubled to pay what's necessary to make sure games are watchable, then what was the point of last year's impasse?

That's right -- greed. It's still the driving factor. And if this officials lockout is anything like the last one in 2001, it will go into the regular season, and it might cost your favorite team a win.